This demo is in response to Articulate E-Learning Heroes Challenge #345 – Using Font Games to Learn About Typography.

Articulate frequently revisits challenges after several years, and this challenge is no exception. I looked at the original challenge, and saw the title Cheese or Font, and thought it sounded like fun. Unfortunately, the link provided didn’t take me to a game, so I had to create my own!

Sometimes you just have to memorize facts to get the job done (although probably not about cheese vs fonts). This short memory game demo shows an engaging, quick way to present this kind of task. Users can play the game several times, and teach themselves various ways to memorize the correct answers.

Click the image below to view the interactive eLearning game demo:  Cheese or Font?

The animation application I used to create the intro to the game is Powtoon. I generally don’t start out knowing what I’m looking for when I create animated videos, I just look at numerous examples and templates on various sites until I develop some ideas of my own. Then I start out with a blank canvas and begin looking for the elements I want to use. In this case, I used a book prop from Powtoon combined with a mouse/cheese image from Pixabay.

Music is an important element, and I listen to music clips (sometimes furnished by Powtoon, sometimes by other applications/subscriptions) until I get the sound I want. Although the opening animation is only approximately 5 seconds long, I want the music to play for the entire Storyline interaction, so I include a couple of minutes to the video length of the Powtoon. 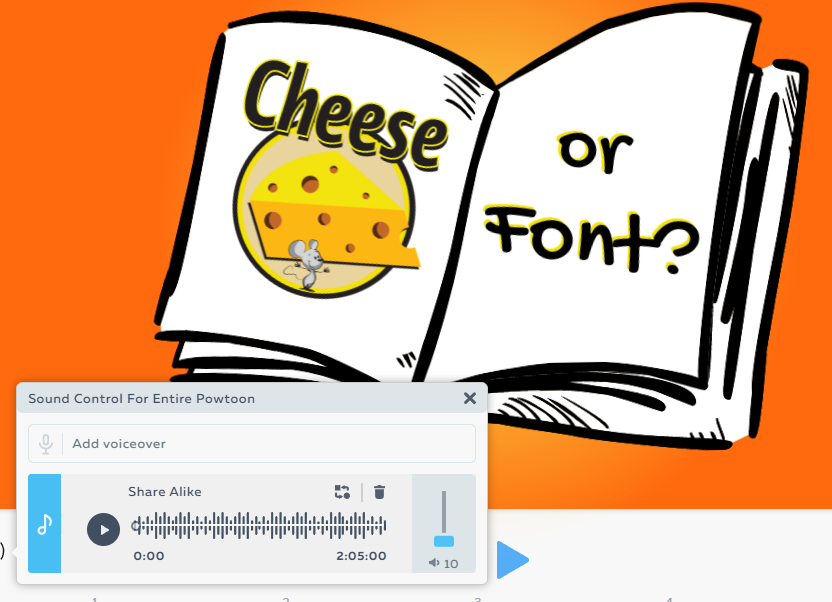 After downloading the Powtoon video, I edit it using Camtasia. In this case, all I wanted to do was decrease the file size while retaining acceptable quality. I was able to reduce the file size of the video from 10,370 KB to 1,635 KB by removing the audio to a separate file, and adjusting the video quality settings before publishing.

Since I want the music to play continuously throughout the interaction, the entire interaction needs to be contained on one Storyline slide, rather than using separate quiz slides for each question. This is done through the use of layers. The audio file is placed on the base layer, and plays continuously as the user interacts with each layer on the slide.

In Storyline, the video timeline and the slide timeline operate independently. By default, whenever the user clicks on a video (or touches it on a mobile screen), the video stops. However, the Storyline timeline marches on. This can wreak havoc with any timed interactions the developer plans to include on a video slide. In order to keep the video and slide timelines synchronized, I always include a “video shield” that I place on top of any videos I use on Storyline slides. The shield is simply a rectangular shape that covers the video entirely, set to 99% transparency. Now, the video timeline will be unaffected by a random touch. The user can stop or start the video only by using the play/pause controls that are used for the Storyline slide, thus making the video and the slide timelines function as one.

Using the Video Tools tab in the Storyline ribbon, I generally set the video compression to “none,” since I’ve already reduced the file size of the video in Camtasia.